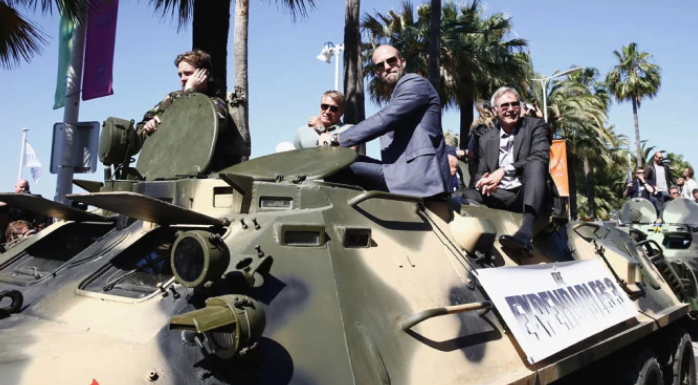 CANNES — Expressions of affection for fellow action stars, playful competitiveness, and a fondness for violent movies abounded at “The Expendables 3” press conference in Cannes Sunday, along with a large helping of wise-cracking banter.

Sylvester Stallone confirmed that the film would be PG-13 and that there was a “good chance” of a female “Expendables” movie. On the question of ratings, he said the film would be “very close to an R,” but added, “We think we owe it to the next generation that they won’t have to sneak in to our film.”

The event couldn’t have played better if it had been scripted, and one journalist thanked them for “bringing the fun back to Cannes,” which was warmly applauded.

It kicked off with the cast riding in tanks along the Croisette, before disembarking to attend the packed presser in the Carlton Hotel, where the atmosphere was febrile but extremely good-natured.

Asked whether — given they were “of a certain age” — the older cast members needed to “take precautions” during the shooting of action scenes, Sly was dismissive.

“Precautions are not in the budget,” he said. “Everybody gets hurt. Everybody goes home bruised.”

“You try to take precautions, but when you do hands on action, that’s what you take pride in: actually getting the bumps and bruises. You take the pain and it paid off.”

Mel Gibson added that they had taken over a whole wing of a hospital.

Arnold Schwarzenegger said the walls had been padded in fight scenes, and when Stallone was hitting him, “he was taking it easy.” And, as a concession, they “didn’t use live ammo.”

When asked, “How do know when you are too old to be an action star?,” Stallone responded: “You wake up in the morning and your ass falls off. Then you know.”

He then added, “Let me tell you: we are children with arthritis.”

Gibson was asked if the others were jealous because he “got all the women” in the past decades, but he responded quizzically, “Did I get all the women back then? I can’t remember, which means I must be too old for this franchise.”

The event then slid into bromance mode with Sly speaking fondly of Arnie. “Even though he has big arms, he has a bigger brain. We are very similar in many ways,” he said. “We are like Ali and Frazier in our competitiveness. As we get older, he makes me work harder.”

Schwarzenegger said Stallone was “a great inspiration to me even though we were competitors,” and they would compete to see who killed more bad guys in their movies, and who was killing “most efficiently.”

At which point they appeared to cuddle up, or at least put their arms around each other in a manly way.

Gibson broke the spell by saying that, “Competition was stiffer in the 1980s than 2014. I’m sure we can all agree, it is not as stiff now.”