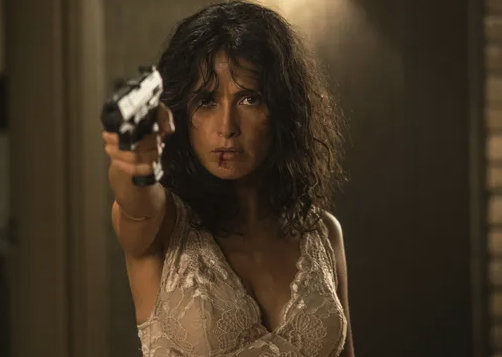 This is definitely not the sweet and bubbly Salma Hayek we’re used to.

In the action-thriller Everly, she plays a desperate woman forced to do battle against an army of Japanese gangsters. This means the 47-year-old Frida and 30 Rock star packs some serious heat, even in a nightgown.

“You’ve never seen me like this before,” says Hayek of the film, which just completed production (no U.S. release date yet). “And I love it. Because you really see a transformation in this character that’s noticeable and shocking. I become a badass.”

In the script by Yale Hannon and Joe Lynch (who also directs), Hayek portrays Everly, a woman who is beholden to the leader of a Yakuza crime gang. After she turns FBI informant, the mob leader who loves her sends thugs to her luxury apartment to torture and then kill her.

But Everly inexplicably turns the tables on one assailant. And, with nothing to lose, continues to battle the army that follows.

“She starts out in one state of mind,” says Lynch. “And through the course of one night, she sort of rises out of ashes as she becomes stronger and stronger.”

The most riveting aspect of the script is that it takes place entirely in Everly’s apartment.

I have always loved self-contained siege films like Die Hard,” says Lynch. “For me, that was the best challenge, to create a visceral claustrophobia.”

And Everly is far from your typical action hero. She’s a fragile person completely unused to firearms. Hayek says she had only briefly used guns in one previous film, Robert Rodriguez’s Desperado, from 1995. But the lack of skill helped her Everly character.

“She has never killed anyone before. She’s done nothing like this. And something else takes over,” says Hayek. “She’s opening a new door of hell every five minutes.”

The film was shot in Belgrade, Serbia, to keep the budget down, and Hayek received training from Serbian special forces to use more than 20 types of weapons, including an Uzi.

“She took one shot and the Uzi recoil threw her,” Lynch recalls. “She didn’t expect that. She was like, ‘I’m done.’ It was hilarious.”

But the moment was appropriate for her character. And Lynch even worked it into the screenplay. Later in the training, Hayek showed more confidence with a different weapon.

“She grabbed a shotgun, cocked it once and said, ‘Let’s play,’ ” says Lynch. “And I thought, this was going to be just fine.”