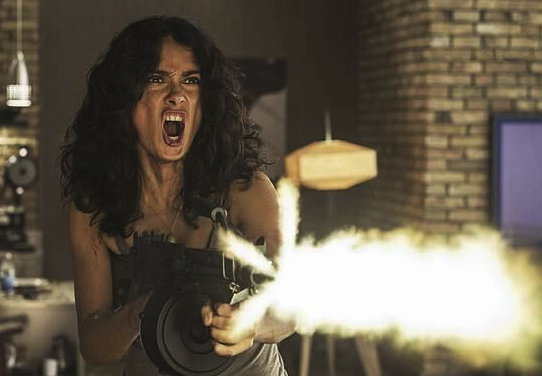 We told you that Joe Lynch‘s next film, Everly (releasing next February), scored distro via Dimension Films and RADiUS a couple of months back, and just yesterday we caught up with Lynch and his star Salma Hayek at the San Diego Comic-Con.

Everly is an intense action thriller centered on a down-on-her-luck woman (Hayek) who is forced to fend off waves of assassins sent by her ex, a dangerous mob boss, while trying to save her estranged mother and daughter.

Everyone familiar with Lynch, who directed The Knights of Badassdom and Wrong Turn 2, knows that he has a habit of putting his actors through the proverbial wringer so we wondered if his approach would be different with Hayek. He laughed, “Believe me, it was all on the page already. I didn’t have to coax Salma into anything!

“Honestly, the amount of heart that got installed into the movie because of her was monumental, and every day – and this is to Salma’s credit – she would ask, ‘Where’s the truth in this?’ That really made me evaluate every single beat in the film.”

He continued, “I had lived with the script so long and Salma came in totally fresh and totally objective and said, ‘Wait. You might have had that really cool shot in your head for five years, but is it resonating the truth of the moment?’ We would literally throw everything out and say let’s focus on how we can get the most emotional impact into the moment while still making the film engaging because it’s all in one room. So it was definitely a mutual masochism I guess you could say. She set me straight plenty of times.”

Given that Salma spends a good portion of the film locked in one room, we asked if maybe she became a tad claustrophobic during the shoot. “I am actually claustrophobic,” said Hayek. “It was the same room, but there were so many different things happening in there. What was really claustrophobic was the time I spent tied up and in a cage during that short segment…

“We had some technical problems that day, and so you are building up emotionally and then you hold it because we are going to go again. At some point at one take when they said cut, I cried for an hour and they were all freaking out. For me, it was very challenging. So yeah, it wasn’t so much the room that made me feel claustrophobic, but that one scene that looks like nothing was REALLY tough.”

Given that Hayek spends most of the film being terrorized, it turned out getting free and giving back some pain was especially gratifying.

“I had to go train to learn how to use a gun, and everyone else on the crew was all excited about the training… I detested it. *laughs* I remember that every time we shot them, I was like, ‘Oh, the noise!’ By the time we reached the end of the shot, I remember that I was shooting and I was not even blinking anymore. By that point so much emotion had built inside me I was ready for revenge. I was just in control of my body… in control of the gun. In the beginning I was supposed to be a good, unassuming victim, but at the end Everly’s a different person.”

“That was one of the benefits of shooting chronological, too, because we really got to work through the emotional beats every step of the way,” adds Lynch. “By the end, you really feel like she’s the phoenix rising out of the ashes.”

TWC-RADiUS will release next February.