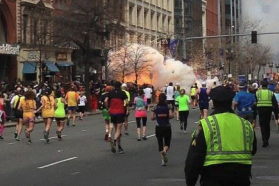 EXCLUSIVE: In a move that creates a race between two major feature films about the Boston Marathon bombing and the citywide manhunt that led to the killing of one terrorist and the arrest of the other, CBS Films is fast-tracking Patriots Day. This film will tell the story based on the firsthand account of Boston Police Commissioner Ed Davis, with help from research done and footage shot by 60 Minutes. A script is nearly complete from Matt Charman, who scripted Bridge Of Spies, the upcoming Steven Spielberg-directed Cold War thriller that stars Tom Hanks. I hear that Boston-bred Mark Wahlberg hopes to play Davis, who led the manhunt. Scott Stuber, Wahlberg, Dylan Clark, Stephen Levinson and Michael Radutzky will produce. Nicholas Nesbitt will be exec producer.

Radutzky is the 60 Minutes senior producer who leads the broadcast’s creative development unit, 60 Minutes Productions. The movie will benefit from the research done for the memorable segment that the newsmagazine generated right after the bombing. That segment is viewable at the bottom of this story, worth a watch if you’ve got 13 minutes. It’s the first time CBS Films has done a project with its sibling division 60 Minutes. They hope to move quickly to lock down an A-list filmmaker and make this the next outing for Wahlberg, who conveniently doesn’t have his next film set. He and Stuber just worked together on Ted 2.

This puts CBS Films in a race with Fox, where Paul Tamasy and Eric Johnson did the first draft and Robocop‘s Joshua Zetumer was hired to rewrite Boston Strong, with Safe House helmer Daniel Espinosa attached. Theirs is based on the book by Casey Sherman and Dave Wedge, and it is also a big priority project for the studio. The filmmakers said in  November they expect Espinosa to have cameras shooting footage of the upcoming Boston Marathon in April.

Both of these films conceivably could be in production this year. It’s always tough when there is more than one project on the same subject, but this is truly a hero tale for the ages. Commissioner Davis, who was right there are the marathon finish line and walked away to take a phone call moments before the blast occurred, played an integral role working with the FBI, Watertown Police Department, Boston Police Department, Massachusetts State Police and local first responders to track, identify and apprehend the suspected bombers. Their tactics included the use of sophisticated identity technology (they actually discovered the murderers acting differently than the crowd) and giving the historic order to put the city of Boston on lockdown as they rushed to catch the suspects.

The story is envisioned as an intense thriller, spanning the five-day search up to the infamous siege where Dzhokhar Tsarnaev was pulled from a boat in Watertown. Three lost their lives at the Marathon blast site, 264 were injured, and a police officer was killed and several injured in the shootout that ended in the death of Tsarnaev’s older brother, Tamerlan. The younger mass murderer is currently on trial. Victims were eulogized in a touching ceremony at Fenway Park, something that most certainly will be part of each of those feature films, including an unforgettable exhortation of defiance by Red Sox slugger David Ortiz.

“There is nothing more compelling than a real story populated by real heroes,” said CBS Films President Terry Press. “The team that we have assembled for this project is determined to give audiences a very personal look at what occurred during the days when the eyes of the world were on the city of Boston and how a group of contemporary patriots faced this crisis.”

CBS Films secured the life rights of Davis, who worked his way up through the Boston ranks to become commissioner and after ending a distinguished career, now is the security analyst on Boston’s WBZ News and has served as a visiting fellow at Harvard’s Kennedy School of Government.