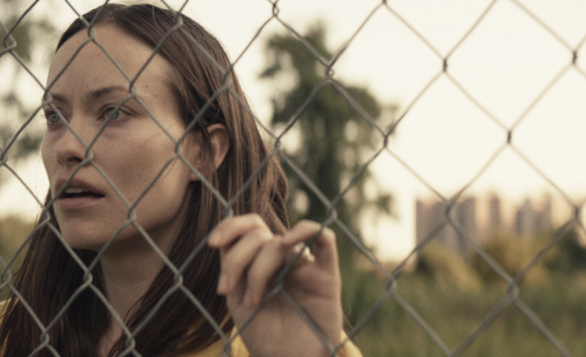 Out this week in limited release is the intimate dark drama Meadowland. Cinematographer Reed Morano (Skeleton Twins, Frozen River) made her directorial debut with this dark drama, starring Olivia Wilde and Luke Wilson as parents who suffer the devastating tragedy of their son’s kidnapping and attempt to face their grief, often without each other for support. Chris Rossi, who also makes his debut as a screenwriter on the project, spoke with us about this excellent but undeniably challenging film.

Lesley Coffin (TMS): Where did the premise for the movie come from?

Rossi: I wanted to look at a familiar story, about a child disappearing, but look at it from a different angle. Rather than look at it from the man’s perspective of finding the perpetrator or enacting revenge, I wanted to look what happens to the mother, played by Olivia Wilde, which we don’t see as often. So we jump a year into the future early on, and look at how she’s dealing with this and how this crisis is defining her. I was interested seeing how she’s coping. And that perspective also made her husband’s character all the more powerful, because he’s a cop being thwarted by his inability to do anything. I just really liked the idea of examining things from that perspective.

TMS: I know you did a pretty extensive rewrite after Reed signed on to direct. Did the original script take more of a procedural approach than the purely domestic approach which ultimately became the film’s shooting script?

Rossi: It was definitely more of a split in the original script. It was always focused on Olivia Wilde’s character, but there is an FBI character investigating the case who had a much bigger role. And that was one of the things Reed suggested taking out when she read the script, so it would be even more focused on Olivia’s journey. It was never going to be a procedural, but Reed probably pulled it back even farther than I would have, to really highlight her journey.

TMS: It felt like Olivia and Luke’s jobs were very carefully selected for the character, with her being a school teacher and him working as a cop, specifically a beat cop rather than a detective. What went into picking those professions for them?

Rossi: Well, for Olivia, I thought there would an added poignancy in being a mother who has lost her child, being around children all day. And secondly, she is a character that loves poetry, and is trying to communicate that to these kids, and I thought there was something deeper in a story about finding solace and meaning in that kind of art. Luke’s character evolved a little bit during the rewrite, but being a cop is a profession we usually equate to male power and here, he’s completely powerless to do anything. And there is something poignant in that and a little more realistic. The idea of revenge is often considered a male fantasy, but here, he has nowhere to go, and he just has to keep turning back to his own feelings and grief.

TMS: Did you do research on the larger subject of grief and how couples grieve the loss of a child, but also this specific kind of loss which leaves the family without any sense of closure?

Rossi: I’ve known people who have lost children and suffered various forms of grief, and I know people take very different paths. Phil, Luke’s character, reaches out to community and attends grief counselling session. Sarah, Olivia’s character, doesn’t. Everyone grieves differently and in their own time. There is a lot of repetition and it comes in waves. It isn’t something you can just live through and then it’s done. A lot of the stories I’ve heard are about trying to simply access your feelings. John Leguizamo’s character says, the only way past is through, and that’s something Sarah has to bring herself to do. And ultimately she does. She does access the grief and goes through that painful release.

TMS: It’s very hard to understand Sarah’s mindset and understand the actions she takes, because she isn’t comfortable talking to anyone about her feelings. Did you find psychological examples which gave insight into why she would do some of the destructive things she does in the film?

Rossi: One thing which often happens after a trauma, is that the victim will often repeat the trauma, but with themselves as the one in control of the situation. The movie begins with an abduction, and moves towards another abduction. And that is something you see again and again with victims of trauma. A young victim of sexual abuse will often act out sexually. And it’s all unconscious. So I think that is something motivating Sarah.

TMS: This being Reed’s first film as a director, what made you think she would be the right person to direct your first script?

Rossi: I knew Reed’s work as a cinematographer. She’s a world class cinematographer who’s done Frozen River and Skeleton Twins, so I knew that the movie would look great. But when I spoke with her during our initial phone conversation, it was very clear that she was passionate about the material. She’s also a mother herself, she has two kids, and her son is actually in the movie playing their child. She just had a perspective and sensitivity that I can’t imagine anyone else having. And she knows and loves actors. So it was very clear to me from those first conversations that she was perfect for it. And as we worked on the script, and got closer to production, every change and suggestion she made only elevated the script and made the movie better. She was also DPing it, so I could literally write to the shoots she was envisioning.

TMS: We constantly hear that female lead films don’t do as well as the box-office. Did you get any feedback from people suggesting it would be safer if the story were told from Phil’s perspective or giving both their perspectives equal time?

Rossi: There probably was a little bit of pressure to make it more his point of view. And we probably expanded his role a little bit to attract a slightly bigger name to the project. Even in this day and age, it is hard to get a movie financed just on the name of a female actress, even a name as a big as Olivia Wilde’s. But it had to be her story. I’m a little sick and tired of the male point of view in these things. We’ve seen it so many times, let’s see it from another perspective. I can think of a lot of bigger movies with excellent female roles, but they are often so passive. And I wanted her character to really be driving the plot, and let her be in control of her destiny and make the decisions which will move her life forward. And that is something Olivia has said about the character as well. That it’s nice to see a woman drive the plot. And it seems like such a simple thing, but is still too rare.

TMS: Did any women offer a piece of advice or make a suggestion specific to writing for the female voice?

Rossi: Not really. There were probably a few changes made on set or things that Reed added. There is a great scene where Olivia goes into a bathroom and watches a video she’s saved of her son on her phone. And that felt like something very specific to Sarah as a mother. But most of that comes from the filmmaking, with Reed and Olivia, both mothers, imagining what it would feel like to lose their child.

TMS: The movie is extremely dark and hard to sit through. For audiences considering seeing it that might be on the fence, what do you think audiences get out of the experience?

Rossi: I hope they get an experience of empathy. There is suffering and trauma all around us. So whether specific to the loss of a small boy or reading about refugees or learning about a shooting victim, we can get a kind of compassion fatigue, but hopefully this cinematic experience can reignite empathy and compassion for some people.