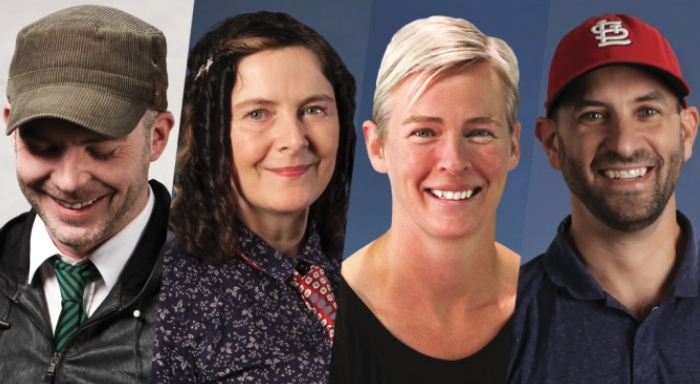 Chris Butler still has a drawing he made of an elephant when he was a 2-year-old in Liverpool. “My parents were astounded because I drew the legs in perspective,” laughs the Laika story guru, who started out in 2D animation, only to be seduced by stop-motion while working on Tim Burton’s “Corpse Bride.” “That was a big learning experience for me because it made me think like a filmmaker for the first time. It wasn’t so much whatever I can draw; it was, ‘Where can we put the camera?’ ”

He went on to co-direct Laika’s 2012 “ParaNorman,” based on an original script — a supernaturally tinged, small-town empathy fable he cooked up while working as the storyboard supervisor on “Coraline.”

His next script for Laika is also an original: “Kubo and the Two Strings,” which incorporates his love for mythic pics like “Clash of the Titans.”

“It seemed like here is an opportunity to have these grand epic battles with giant monsters,” he says.
— Peter Debruge

Deborah Cook says it was a “happy accident” that she wound up creating costumes for stop motion. As a sculpture student in London she created upholstered art pieces with wood and metal armatures. That led to work making scaled-down pieces for films: Tim Burton’s “Corpse Bride” and Wes Anderson’s “Fantastic Mr. Fox” in London, with Laika’s first film, “Coraline,” in between. She returned to Portland, Ore., for “ParaNorman” and has stayed on.

She not only designs Laika characters’ clothes, like any other costume designer, she oversees the knitting and weaving of bespoke fabrics, laser cutting and etching of those fabrics, and the embedding of metal alloys to make the costumes stiff enough to be animated frame-by-frame.

“Each project’s got a new challenge that I really want to meet,” says Cook. “That’s what’s kept me here.”

So her large-scale art pieces have to wait. “I’m doing them on the inside,” she quips.
— David S. Cohen

“Most people that become puppet makers could never focus on the one thing,” says Georgina Hayns. “They had an understanding of all art forms.”

And indeed, while enrolled in art college, Hayns couldn’t decide between sculpting, painting, sewing and ceramics. Eventually she found a way to use all of those skills building stop-motion puppets for model maker Mackinnon & Saunders in her native U.K.
During school, Hayns found herself restoring Victorian dolls in her free time — a hobby that became a vocation, serving her well on such pre-Laika gigs as “Mars Attacks!” and “Corpse Bride.”

“The essence of stop-motion puppet making is the same, really, going back to when ‘King Kong’ was made,” she says, though Hayns’ team has advanced nearly every aspect of puppet design and construction, from the flexibility of the underlying skeletons to the laser-cut bespoke fabrics in their costumes.
— Peter Debruge

Brad Schiff goes back a long way at Laika — so far back he pre-dates Laika itself.

He started all the way back on “The PJs” in 1998 at Laika’s predecessor, Will Vinton Studios, when Travis Knight became an animator there. “There are only a handful of us left,” Schiff says.

Today, Schiff can’t imagine doing anything else. “I am solely a stop-motion guy,” he says. “I have no other skills other than sculpting and playing with dolls.”

Those skills have gotten him work on quite a few Oscar-nominated stop-motion films, including “Corpse Bride,” “Fantastic Mr. Fox” and Laika’s first feature, “Coraline.” He moved up to become animation supervisor on “ParaNorman,” “The Boxtrolls,” and the upcoming “Kubo and the Two Strings.”

Making the unlikely choice back in college to only do stop-motion animation has worked out for Schiff. “Going to school and doing these things and meeting Travis,” he says, “I feel like I’ve won the lottery.”
— Terry Flores