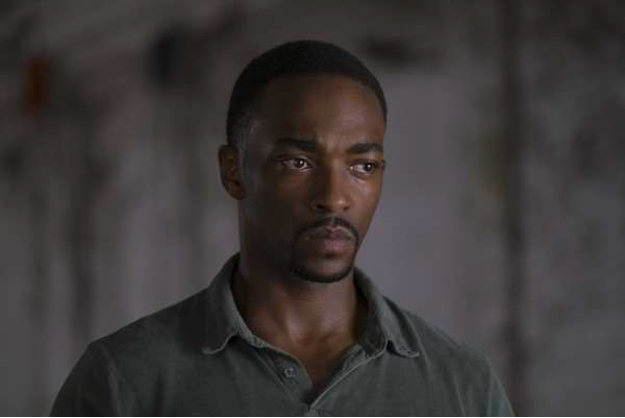 Anthony Mackie is nearing a deal to star in Point Blank, a new Netflix movie that will reunite him with his fellow MCU co-star Frank Grillo, multiple sources tell Collider.

Joe Lynch (Mayhem) is directing from a script by Adam G. Simon (Man Down), and Joe Carnahan is producing with Grillo via their War Party banner, along with French giant Gaumont. The film will be an action-packed remake of Fred Cavayé‘s 2010 crime drama Point Blank (A bout portant). Production is slated to start this summer at a more than reasonable budget of around $12 million.

Mackie will play a nurse who’s forced to spring a wounded murder suspect from the hospital when the man’s brother kidnaps his pregnant wife and wants to make a trade. Grillo will play the wounded man who needs Mackie to keep him alive long enough to make the exchange. As you might imagine, dirty cops factor into the equation.

So yes, Falcon is teaming up with Crossbones and a couple of above-average Joes, and I kind of love it. Mackie is actually rather undervalued as a leading man, as not only do the Marvel fans love him (a not insignificant number of people), but he has a lot of cred as a dramatic actor as well. Tonight’s the NBA Draft, so I’ll allow myself this comparison — but if I were to compare Mackie to a basketball player, I’d pick Magic Johnson, because he always elevates everyone around him. Look at his incredible work in Half Nelson and The Hurt Locker, two films that earned Oscar nominations for his co-stars, Ryan Gosling and Jeremy Renner. I’m just saying, I don’t think Mackie gets the respect he deserves as a leading man, so good on Netflix for recognizing his ability. Mackie next stars opposite Gina Rodriguez in Sony’s remake of Miss Bala, and he also stars in The Hate U Give. He’s also producing and starring in the Johnnie Cochran movie Signal Hill. He’s represented by UTA and Inspire Entertainment.

Meanwhile, Grillo has carved out a real niche for himself as grizzled badass, and Netflix scored a critical hit with last year’s Grillo-led action movie Wheelman (89 percent fresh on Rotten Tomatoes), so it makes sense that the streaming service would want to jump back into business with him.

Grillo recently wrapped Carnahan’s next movie Boss Level, and he’s back with his The Purge: Election Year director James DeMonaco for Blumhouse’s Once Upon a Time in Staten Island. He’s also has the Bruce Willis movie Reprisal and a pair of films with James Badge Dale on the horizon. He’s repped by WME and Management 360.

Lynch is coming off of the well-reviewed indie Mayhem starring Steven Yeun, and he also directed the hell out of the 2014 Salma Hayek action movie Everly. He’s repped by Paradigm, Anonymous Content and Rob Szymanski at Eclipse Law Corporation.

Simon wrote the Shia LaBeouf drama Man Down and has an onscreen role in Carnahan’s Boss Level. He also wrote Carnahan’s remake of The Raid that Grillo was once going to star in.