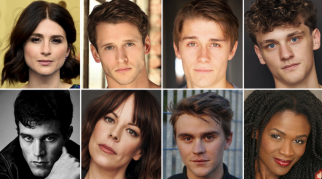 The First Lady, created by Aaron Cooley and produced by Lionsgate TV and Showtime, is a revelatory reframing of American leadership, told through the lens of the women at the heart of the White House. Season 1 focuses on Eleanor Roosevelt (Anderson), Betty Ford (Pfeiffer) and Michelle Obama (Davis).

Picking will portray the young Jerry Ford, an ex-college football player just returned from the service, who meets Betty Ford in Michigan and marries her in 1948, just as he wins his first Congressional seat.

Sullivan will play Bill Warren, Betty Ford’s first husband, a salesman she marries in 1942 and then divorces in 1947.

Chevannes will play Clara Powell, the Ford family’s longtime nanny and family friend, who remained one of Betty Ford’s closest confidants during her addiction treatment.

Davis executive produces the series with Susanne Bier, who directs.

Cash most recently starred as Stormfront in The Boys and will soon appear in This Country, written by Jenny Bicks and directed by Paul Feig. Her other notable credits include Fosse/Verdon, You’re the Worst, recurring roles on The Newsroom and We Are Men and films Scare Me, Social Animals, The Wolf of Wall Street, among others. She is repped by UTA, Industry Entertainment.

Picking appears in the upcoming Top Gun: Maverick and played Rock Hudson in Ryan Murphy’s Netflix series Hollywood. His credits also include Horse Girl, Sicario: Day of the Soldado, Blockers, Only the Brave, Patriots Day, Goat and Dirty Grandpa. He is repped by CAA and Ziffren Brittenham LLP.

Boyd’s recent credits include The Resident, NCIS, Heathers, The Mick and Awkward. As a child actor, Cayden played Tim Robbins’ son in Mystic River and a young Ryan Reynolds in Fireflies in the Garden. He is repped by Authentic Talent & Literary Management and A3 Artists Agency.

Hills is a recent graduate from the BFA acting program at USC and a co-founder of the sketch-comedy troupe The Elephant Department. Recent credits include Snatchers and Funny Business. He is repped by BRS/Gage and Velocity Entertainment Partners.

Cook portrayed Aaron Fisher in Paterno and is featured as Mouthpiece in the upcoming West Side Story. His TV credits include episodes of Law & Order SVU, House of Cards, Veep and 30 Rock. Cook played Riff in the Broadway revival of West Side Story and Billy in Billy Elliot,among others He is repped by CESD and Authentic Talent & Literary Management.

Kritzer most recently recurred in the television series Bridge and Tunnel. Other screen credits include Vinyl, Difficult People, and Younger. She has starred on Broadway with leading roles in Beetlejuice, Something Rotten, A Catered Affair, Sondheim on Sondheim and Legally Blonde. She is repped by Lasher Group and CESD.

Sullivan had a recurring role in Roswell, New Mexico as well as in Agents of S.H.I.E.L.D. He has appeared in The Irishman, The Rookie, The Son, Bull and Chicago P.D. He is repped by Viking Entertainment and Innovative Artists.

Chevannes’ television credits include Chambers, Shrill and Evil. She has written and directed three award-winning independent feature films: Kings County, NY’s Dirty Laundry, and Hill and Gully. Her stage credits include Halfway Bitches Go Straight to Heaven, runboyrun and In Old Age, which garnered her nominations for both a Drama Desk Award and Drama League Award this past season. She is repped by A3 Artists Agency and Principal Entertainment LA.