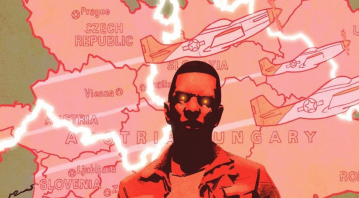 The six-issue series takes place in 1955 Alabama and follows a former World War II Black soldier named Avery Aldridge. Though he may seem ordinary with his wife and daughter, Avery will come to possess new abilities while also coming to grips with a society that would never want a Black man to have any power.

“Dark Blood is a thrilling, genre-bending story that combines twisty sci-fi and historical action, incredible feats of bravery and deep familial love,” said Morgan. “I could not be more grateful for my creative partners at BOOM! who believed in this passion project from the start. I’m so excited for readers to take this wild ride with these characters I love so much.”

“LaToya and Walt are incredible storytellers and are telling a riveting story with complex, layered characters and an incisive look at American history,” said Dafna Pleban, Editor, BOOM! Studios. “I’m deeply grateful to have had the chance to work with the brilliant creators on this team to bring their unique and thrilling vision to readers and fans everywhere!”

Morgan’s television credits include Shameless, Parenthood, TURN: Washington’s Spies, Into the Badlands, and The Walking Dead. Barna is a self-taught illustrator specializing in comics, cover art and children’s books.