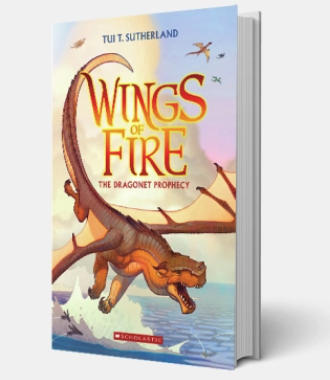 The “Wings of Fire” books by Tui T. Sutherland are being adapted into an animated series at Netflix with Ava DuVernay set to executive produce.

The “Wings of Fire” books have sold more than 14 million copies around the world to date. Netflix has ordered 10 40-minute episodes of the series. The project had been announced as being in development last year, though no network or streamer was attached at that time.

In the series, a bitter war has raged for generations between the dragon tribes who inhabit the world of Pyrrhia. According to prophecy, five young dragons will rise to end the bloodshed and bring peace back to the land. Raised and trained in secret from the time they were hatched, the Dragonets of destiny– Clay, Tsunami, Glory, Starflight, and Sunny – embark on an evolving quest that will bring them face to face with their true selves and the overwhelming scope of this savage war they are destined to bring to an end.

Dan Milano, Christa Starr, and Justin Ridge will serve as executive producers and showrunners on the series, with Milano and Starr adapting the books for television. Sutherland will also executive produce, with DuVernay, Sam Register, and Sarah Bremner executive producing via ARRAY Filmworks. Warner Bros. Animation is the studio. DuVernay is currently under an overall deal with Warner Bros. Television Group

“Within this epic book series from the mind of Tui Sutherland is an elegant saga filled with wisdom and wonder, exploring ideas of belonging and bias, camaraderie and community,” said DuVernay. “On behalf of my colleagues Sarah Bremner and Paul Garnes of ARRAY Filmworks, we’re thrilled to partner with Netflix and Warner Bros. Animation for this dynamic adaptation where five young dragonets fulfill their destiny and show viewers how to fulfill their own.”

The project marks the first animated series for ARRAY. DuVernay and the company are currently working on the DC Comics live-action pilot “Naomi” at The CW. DuVernay also created and executive produces the OWN shows “Queen Sugar” and “Cherish the Day,” both of which are produced by ARRAY. She also received substantial praise for the Netflix limited series “When They See Us,” which explored the true story of five young men of color who were falsely accused of rape only to be exonerated years later. DuVernay created the series in addition to executive producing and directing all four episodes. The series was nominated for 16 Emmy Awards with two wins, including best actor in a limited series for Jharrel Jerome.

“I am so immensely thrilled and grateful that Ava DuVernay is our Queen of Dragons (I’m pretty sure that’s the official title),” Sutherland wrote in part in a blog post. “Ava is someone who saves the world every day without waiting for any prophecy to tell her what to do. I hope some of my dragons grow up to be just like her! And I knew the minute I met our showrunners, Dan Milano and Christa Starr, that they are funny, kind, super-nerd kindred spirits who 100% understand what I’m trying to do with the books. FanWings, you will love them, too! In their talented hands, I have faith the TV show will fulfill the dreams of all the people who’ve asked me that question over the years.”