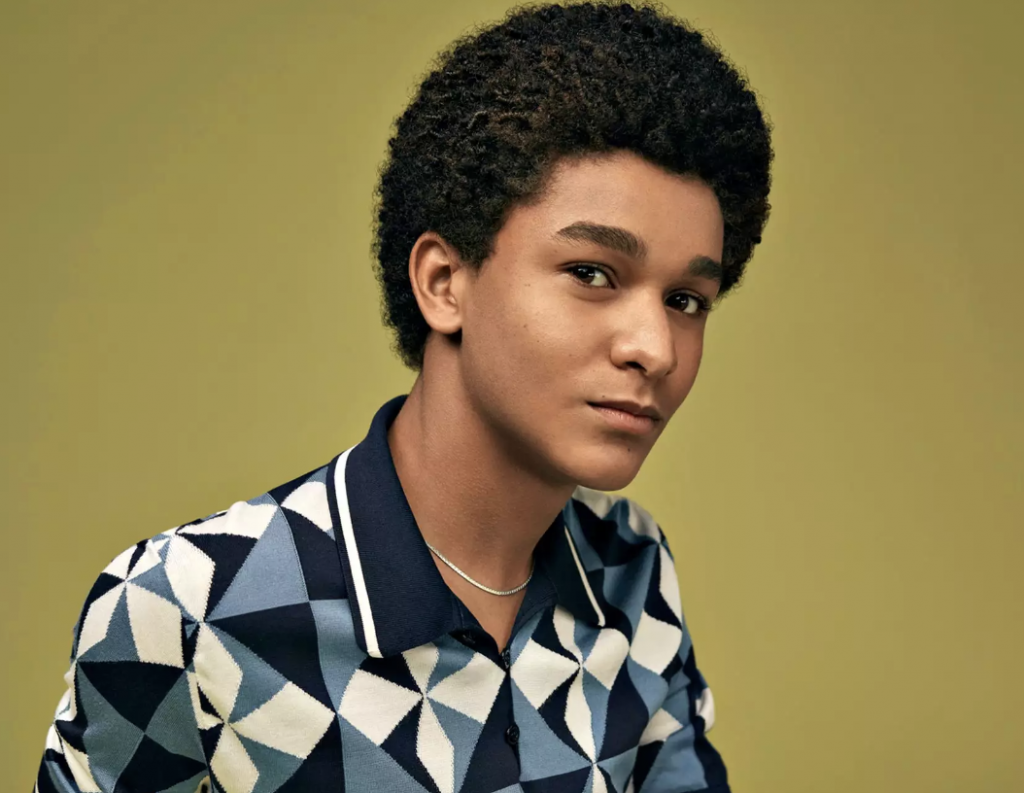 Jaden Michael is no athlete, but he knows a winning playbook when he sees it.

The 17-year-old actor steps into the cleats of young Colin Kaepernick for Colin in Black & White, which hails from Kaepernick and Oscar-nominated filmmaker Ava DuVernay. Premiering Oct. 29, the powerful Netflix limited series chronicles the teenage years of the former NFL quarterback, before he was playing in the Super Bowl or taking a knee to protest racial injustice. The coming of age story will be “tackling the obstacles of race, class and culture as the Black adopted child of a white family.” Nick Offerman (Parks and Recreation) and Mary-Louise Parker (Weeds) star as Rick and Teresa Kaepernick, while the real Colin appears as the present-day narrator.

“I hope that more people are open to researching his motives,” Michael tells EW of Kaepernick. “I understand that some might not agree with his methods, or where he did it, but at least try and learn more about what he’s trying to tell you and what he’s trying to teach. And hopefully through that research you’re able to find the truth.”

EW chatted with Michael about becoming a fan of Kaepernick’s work as an activist, using his subject as the ultimate resource, and hoping to make critics rethink their stance.

ENTERTAINMENT WEEKLY: What was your knowledge of Colin before this opportunity came your way? Are you a football fan? Were you a fan of his?

JADEN MICHAEL: Sports had never really been my forte, but in 2016 he knelt for the first time and I fell in love with the fact that he risked it all to talk about what he believed in. And it was something that I was trying to do myself. Stand up for children’s rights and mental health, among other things. It was really beautiful and honorable seeing someone do that. Since then, I started looking up to him.

So then what’s the reaction when the prospect of you playing Colin comes on your radar?

Oh, I was so frantic. It was the middle of 2020, so we’ve all been in quarantine for six months or whatever it was, and I live in New York City, so the center of the epidemic, I think at that point. And here was this amazing opportunity to work with people I’ve looked up to — I admire their work so thoroughly — and I have an opportunity to at least talk with them, maybe. At the time, the greatest moment of the year was having Ava and [casting director] Aisha Coley in my room on my Zoom. That was enough for me, just having the opportunity to talk with them — and then I got involved, which is crazy.

When did you first connect with Colin, and how surreal was that conversation?

The first time I spoke with him was during the auditioning process. After a physicality test, I had to have a meeting with Colin, and we spoke for a good hour and a half about just music, TV shows, and movies from the time period. He’s 15, 16 years older than me and we have a lot of overlap. That’s so crazy to me, that someone who’s so much older, we have so much in common already. But other things as well. Just talking about race relations in America, growing up as a person of color, and what standing and kneeling really means for Colin. I think that was important for me, just having that conversation and being able to set the tone for the show and build Colin out.

As you went through this whole experience together, what did that relationship turn into? There’s no better resource to have than the man himself.

I was so lucky, because I never really played team sports before, so I kind of had to learn 17 years of three different sports in three months. So having a professional in all three of those sports, it was welcomed — and needed — in my case. But not only as a resource for the sports and physicality of the project, but also emotionally having someone to literally work off of. I usually like creating a birthday for the character that I’m playing, so I do a lot of research into their astrology, and I’ll say, “Okay, this person is like a moon in Aquarius,” and try to build the character that way. But here I had someone who already had a birthday! So having that as a resource to work off of, it was really great being able to get feedback from the person I was supposed to be mimicking.

At any step, whether it was during the auditioning, preparing, or actual shooting, did you feel pressure taking on this powerful true story?

A lot of stresses come with a project of this magnitude. These are conversations that need to be had. One of the things on the forefront of my mind while I was trying to shape Colin for the show was, do I want to straight out attack these conversations and ask these questions blatantly, or do I want to sort of make an experience for everyone? And I think I settled somewhere in-between. I think it’s most important for people who maybe don’t agree with Colin to find a safe place to watch something interesting and informative, where they can redo their research and try and understand Colin from a different perspective.

For sports fans, we’ve known Colin since he came into the NFL, and then many more people have come to know now him in recent years outside of his athletic achievements. But how would you describe the Colin we’re getting here as a teenager?

He’s a normal teenager facing unreal circumstances. And those circumstances built the legend that we see today. The way that I try to conceptualize it is, he’s you. He’s a regular teenager. He’s had your life. He’s been in your high school. You’ve seen him play on the team. But deep down he’s thinking on a different level, and he’s thinking about his future, and he’s thinking about where is he going to be, and thinking about what he wants. Ultimately what he learns through challenging these topics is, I don’t need to conform to anyone’s realities or expectations. I can be my own person, I can form my own reality, and I can be myself; I can find happiness in myself in that way.

Earlier you mentioned Ava, who has become one of the most respected filmmakers out there. You have Colin but then she brings this totally different perspective and skillset to this. What has it been like working so closely with her?

Ava’s the Gorilla Glue of the series. She made the bridge between the sports side of Colin and who Colin is as a person. Just connecting us all together, making sure we’re on the same page. And she’s just beautiful in that way. I think the best way to describe her is the diplomat. Even in her directing style, she won’t say, “How about you do this?” She’ll say, “I want to invite you to think about it in this way.” And it’s like, “Alright, Ava, I’ll do it. Don’t worry!” [Laughs] She just has a beautiful soul, and really knows how to control the mood and tone on-set and keeps everything running upbeat.

Upon their involvement being announced, I was instantly intrigued by the casting of Nick Offerman and Mary-Louise Parker as Colin’s parents, Rick and Teresa. How was it getting to collaborate with them and building these important onscreen relationships?

They’re lovely people. I don’t know how else to describe it. They want to know what you’re thinking and they want to work with you. And that’s one of the things that I love so much about acting; it’s just the collaboration between two people to build a relationship out of nothing. And Nick and Mary, they’re legends in the acting world and they know how to facilitate those relationships. So it was beautiful being around them and learning from them, even though they don’t need to say anything. Just being in their presence, you’re like, “Oh, I learned something.”

You’ve talked a bit about your mindset when it comes to the different viewpoints of the audience, but is there one thing you’d hope people takeaway from the series?

I hope that more people are open to researching his motives. I understand that some might not agree with his methods, or where he did it, but at least try and learn more about what he’s trying to tell you and what he’s trying to teach. And hopefully through that research you’re able to find the truth. I hope people find their truth in who they are, in their purpose, in their future. For younger people and people of color, I hope they learn to stand up for themselves and love themselves. But, also, for those who don’t agree, maybe learn to accept a different opinion.

I feel like so many of the important details of Colin’s story have been conveniently lost. Like, it was literally an ex-Green Beret who suggested he start kneeling instead of sitting. For you, was there something that particularly stuck with you from your research or conversations with Colin?

There’s this video that hit me like a ton of bricks. One of the first interviews Colin did — at that time he had only sat [during the anthem] — and a reporter asked, “Do you think you’re going to lose your job?” Colin’s face dropped a bit, he thought, and he goes, “I don’t know, but if I do, I did the right thing and I know it’ll be worth it.” That’s something anyone can find admirable.