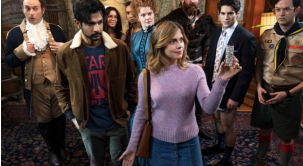 CBS has given “Ghosts” a full season order for the 2021-22 broadcast season.

The freshman comedy, which just premiered on Oct. 7, follows a young couple (played by Rose McIver and Utkarsh Ambudkar) who inherit a country estate and decide to move into it to fix it up to become a bed and breakfast. While there, she has an accident that allows her to see the many deceased residents who are still tethered to the home. The titular ghosts are played by Danielle Pinnock, Brandon Scott Jones, Sheila Carrasco, Richie Moriarty, Devon Chandler Long, Asher Grodman, Román Zaragoza and Rebecca Wisocky.

“We’re thrilled this spirited new comedy has struck a chord with viewers and critics alike and is off to a great start,” said Thom Sherman, senior executive vice president, programming, CBS Entertainment. “We’ve loved ‘Ghosts’ since day one, and thank the outstanding executive producers, cast and writers for skillfully bringing to life the boldest, most unique comedy you’ll find anywhere on television this season.”

Of the new version, Variety‘s chief television critic Caroline Framke said in her review, “It’s admittedly rare for a sitcom to find its feet as quickly as the American ‘Ghosts’ does, no doubt because it’s got a fairly malleable outline to follow that’s already proven successful. So while it’s genuinely jarring to watch this iteration of ‘Ghosts’ if you’ve seen its British inspiration, if you have not … well, it’s charming enough to merit sticking around, anyway, especially as it begins to find its own way in a third episode completely divorced from the show’s source material.”

CBS says “Ghosts” has become the No. 1 most-watched new comedy this season, adding that its two-episode premiere had the largest lift in L+7 of all new and returning comedy premieres thus far this season. The show received more than 5.5 million total live viewers on premiere night but added more than 2.2 million viewers in L+7, bringing total viewers to 7.76 million. Its third episode, airing on Oct. 14 only saw a small dip in total live viewers, receiving almost 5.3 million. Its fourth episode airs Oct. 21 in its usual time slot of 9 p.m. on CBS. Episodes are available to stream on Paramount Plus after they air linearly.