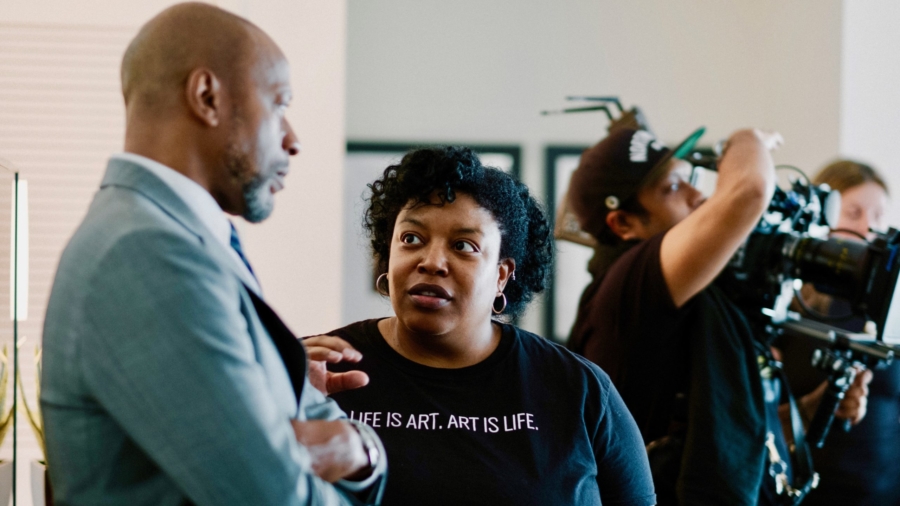 Born and raised in Los Angeles, LaToya Morgan is a graduate of the American Film Institute Conservatory where she received an MFA in Screenwriting.  She’s an alumna of several prestigious fellowships including the Warner Bros. Television Writers’ Workshop, the Producers Guild Power of Diversity Fellowship, Film Independent’s Project: Involve and its Producer’s Lab, and the WGA’s Feature Access Project.  She’s been a writer on Shameless, Parenthood, Complications, TURN: Washington’s Spies, Into the Badlands and The Walking Dead.  After back-to-back overall deals at AMC, this two-time NAACP Image Award nominee inked a new multi-year overall deal with Warner Bros. Television to write and develop new television series across their family of prestige networks and across digital platforms. Under the pact, she founded TinkerToy Productions, her new producing banner and has been tapped by J.J. Abrams to co-create, showrun and executive produce the upcoming HBO Max series Duster, which has been given a series greenlight.

How were you introduced to the film industry?

As a kid growing up, I was a super nerd, and I watched way too much television. I was a big fan of the Twilight Zone marathons that would come on every fourth of July. I knew every episode and which ones were written by my favorite writers. I was a huge fan of Rod Serling, of course, but Richard Matheson and Charles Beaumont wrote episodes that stole my heart and made me think.  That really started my love of science fiction stories. But my true understanding of the film industry came from watching classic Hollywood films.  At a really young age, I’d obsessively watch Turner Classic movies.  Everything from Alfred Hitchcock and Douglas Sirk to Bette Davis and Dorothy Dandridge. I really had a passion for timeless stories and filmmaking styles.  Again, pure nerdiness.  And in my secret heart of hearts, I always wanted to figure out a way to become a writer in both television and film because I enjoyed both mediums.

I eventually went to film school at the American Film Institute, which is a phenomenal 2 year program. I really got to connect with fantastic professors who were wonderful filmmakers.  Several of them had been nominated for Academy Awards and Emmys on top of being wonderful humans and they helped me hone my craft as a writer, both in film and TV.

I read that your first screenwriting job was for Shameless.  What was that experience like?

It was fantastic. You can’t go wrong with your first show being a bona fide smash hit. John Wells, who was the showrunner, was one of my TV idols. Before I got my first job, I always used to say that if I became a television writer, I wanted to have a career that was a mash-up of John Wells and Shonda Rhimes.  They each had careers in television and film and excelled at both.  A lot of the shows they were working on went on for multiple seasons. That was something I aspired to.  So being in that room was a dream come true.  Every day on Shameless was more fun than should be allowed. Some of the funniest writers in the industry were in that room with me. Mike O’Malley, who is so funny and an incredibly kind person, was there.  My seat in the writers room was sandwiched between Alex Borstein, who is ridiculously hilarious, and John Wells, who’s one of the most venerable showrunners in the business.  So I sharpened my skills every day working with them.

Did you always have an interest in producing or did it turn out to be an unknown passion of yours?

While I was at AFI, we had guest speakers come in and talk to us about what it was like to work in television. You would learn that you don’t just write in television, but you produce. You’re responsible for stewarding the vision of your episode when you go to set. I was always very excited about that. I didn’t think I’d like being on set as much as I did, but I like being in the mix.

In television, when you are covering your episode for the shoot, you are the line of communication between the entire crew and your showrunner. You are the lynchpin for how an individual episode gets made, and I really loved the challenge of that, so I became a set rat.  When I go on set, I learn everyone’s names and their jobs in every department. I open up the lines of communication so we can create and problem solve together.  I’m also just a people person, so I like meeting people and learning about them individually because we’re all on this crazy journey together.

What were some challenges you faced in your journey as a writer and producer?

Working in Hollywood is about failure. Your job every day is to go into a writer’s room and pitch ideas. Some of them are gonna be good and land, some of them are bad and crash. Every day, your job is to fail. So you have to develop a sense of separation of your ego from that and understand that it’s part of the process.  I think part of the journey was realizing “Wow, everyday I’m going to receive some form of rejection and guess what? I’m going to be fine. I’m not going to die. It’s not going to be the end of everything.”

Once you’re used to that, the sky’s the limit. It’s really about coming to terms with the ebb and flow of what it means to be a working writer in film and television. You don’t have to limit yourself. When I was a staff writer moving up the ladder on a show, there were things that were naturally assigned to me as my duties. But I always tried to reach beyond what the expectations were of me. If there were extra things that I could do to make my boss’ life easier, I volunteered to do them.  I wanted to be seen as someone who was an asset to the show.  That work ethic is something that I pride myself on to this day and it’s served me well.

You have a comic series that was released last summer (2021) called Dark Blood that follows a Black World War II veteran who develops super powers. Can you tell me how you came about creating that story, and why you chose comics as the medium?

I’ve always loved comic books, especially Marvel comics. I was a big Spider-Man fan and I loved The X-Men. I couldn’t draw, but my brother could and I was really jealous because I loved comics so much.  I ended up teaching myself how to write them because I couldn’t draw them. Scott McCloud has a book called Making Comics and I begged my mother buy it for me, and she did.  I read it cover to cover and taught myself to write comics.

So I’d been writing my own little comics for years and after I got my first couple of TV writing gigs I made a connection with a small independent comic book publisher and they invited me to write a couple of spin-offs for two of their popular series.  That’s how I got my first comic book series published.  From there, I met with the wonderful folks at BOOM! Studios and pitched them the story of Dark Blood and they flipped for it.  So I knew that I had something that could be special.  I really wanted to honor the history of Black WW2 veterans.  I think units like the Tuskegee Airmen haven’t gotten enough shine for their harrowing heroics.  There hasn’t been enough gratitude for the work of so many Black soldiers who sacrificed so much, including their lives, for this country.  Avery Aldridge is the hero of Dark Blood and he’s an amalgam of so many of those brave soldiers that I came across in my research.  But I wanted to give the story a genre-bending sci-fi edge and it felt like a comic book series was the best way to do that.  With comics you can tell a sprawling story in an economical way that can really give the reader a sense of how the story can translate to other mediums like film and TV.  You need a compelling story but you also need amazing artists to help tell that story. And I had that in spades in Walt Barna and Moises Hidalgo who did the artwork for Dark Blood.  When the comic was first published last year it came out to huge sales and excellent critical reviews so I’m very proud of it.  And I’m excited for more people to read it once the trade publication of all six issues comes out in bookstores everywhere on June 8th, 2022.

Other than Dark Blood, is there anything else you’re working on?

I have Team Marilyn, which is a short film I wrote, executive produced, and directed. It won the WrapWomen and STARZ ‘Telling Our Stories’ Short Film Competition grand prize of 10,000 dollars and it’s been distributed on STARZ.  So you can find that on demand and on the Starz website.

Currently, the biggest thing I’m working on is Duster, a show that I co-created with J.J. Abrams that I’m showrunning for Warner Bros. and HBO Max.  I hired a great group of writers to come on this wild and crazy ride with me and it’s been a lot of fun. We shot the pilot and we’ll be in production this year.  I’m very excited for it!

I also started my production company TinkerToy Productions through my overall deal at Warner Bros..  The goal is to incubate and curate phenomenal and inclusive voices and to produce  projects with fantastic storytellers and creatives.  I truly believe in opening the door for others on this journey.  So I’m grateful to be working with such a cool group of talented folks.

Do you have advice for other creators in your field who are interested and/or considering a transition into film?

The most important advice that I have is for people to be themselves. It seems very basic and simple, but the best thing you can do is to be yourself because you cannot be replicated. You are the thing that is unique. Your life experiences and everything you’ve been passionate about, what your parents have exposed you to, the things you watched as a child, the jobs you’ve had, the relationships you’ve been in, all those things are what make your story different from my story. And that’s the thing that’s going to make you shine.

Lastly, I’d say always expand your skillset.  A couple of years ago I decided I wanted to add directing to mine, so I directed a short.  I started small and manageable and it’s grown from there.  Be the thing you say you want to be. That’s the clearest version of what I think will help people become successful. And have fun. Because it is a lot of work, but at the end of the day, we are all here because we have so much love for the craft. So have a good time. Enjoy every step of the journey.